Anne Denholm is one of the leading British harpists of her generation and served as Official Harpist to HRH The Prince of Wales from 2015-2019 . She is earning a reputation for her interpretations and powerful performances across a variety of musical fields.

Anne underwent a British musical upbringing, studying at the Junior Department of the Royal Welsh College of Music and Drama, the Purcell School, Newnham College Cambridge University and the Royal Academy of Music (RAM) in London. She received her Master’s from the RAM with distinction, studying under Karen Vaughan and graduating with the Renata Scheffel-Stein Harp Prize and a Regency Award for notable achievement. Whilst at the RAM she was the first ever harpist to win the historic RAM Club Prize. Anne enjoys giving regular solo recitals across the U.K. and further afield, from music clubs and societies to international harp festivals. Recent highlights include a trip to Bangkok for the Third Thailand International Harp Festival, two performances at the Wales International Harp Festival, a solo recital for the RNCM Strings Festival and travelling to Bogotá, Colombia to give two recitals and a workshop. 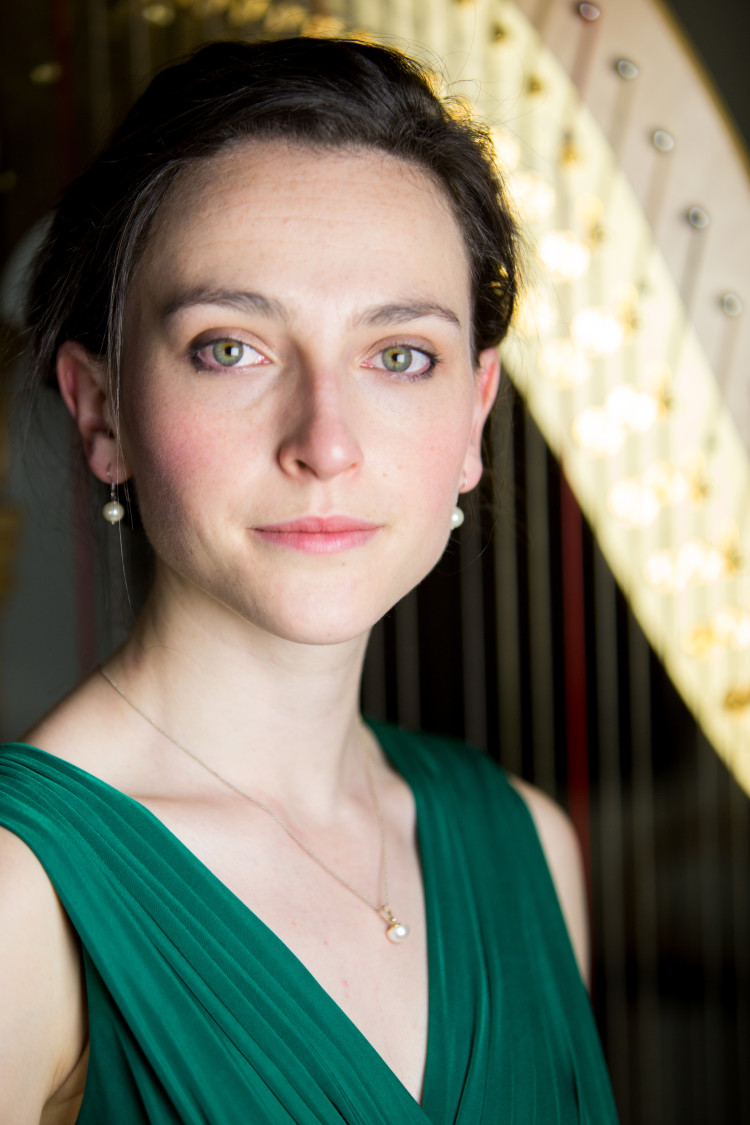 Anne is increasingly in demand as an interpreter and performer of new music; she has been recording and premiering new works for solo harp since 2006, and in 2013-14 worked with Sally Beamish on a video project of her work, ‘Awuya’. She is a founding member of award-winning contemporary experimental quartet, The Hermes Experiment,and has enjoyed working with Birmingham Contemporary Music Group, Spitalfields Music and Mahogany Opera Group.Anne has worked with composers from secondary school age to professionals; for three years she worked as an instrumental tutor on the annual Sound and Music Summer School at the Purcell School, and has regularly worked with composition students at Birmingham University and at other institutions via her work with The Hermes Experiment.

Anne freelances with orchestras and choirs across England, most recently working with the City of Birmingham Symphony Orchestra, BBC Concert Orchestra, Northern Ballet Sinfonia and Sir John Eliot Gardiner’s Orchestre Révolutionnaire et Romantique. She has recorded for CDs with The Choir of St John’s College Cambridge, The Temple Church Choir and The Carice Singers. Anne is also Principal Harpist with Ensemble Cymru, a group championing chamber music throughout Wales.

In addition to performing, Anne is passionate about using music in community and education contexts. She has been practising in this field since 2008, when she first started training with the Purcell School’s award-winning IMPULSE music education group. With them she toured schools in Cornwall and Norfolk, as well as co-directing a tour to South Wales. Since then, she has worked with the Cambridge Music Education and Outreach group, the Open Academy (RAM), and the LPO Education Team. She has also worked as a solo harpist with Live Music Now in Wales and England.

Anne is also a dedicated teacher, giving private lessons in addition to holding the position of Harp Teacher at Eton College, Windsor and the Dragon School, Oxford. Recently, Anne has thoroughly enjoyed working as a Harp Tutor with the National Children’s Orchestra of Great Britain.

[If you would like to read this biography in Welsh, please contact us via the ‘Contact’ page / Os hoffech ddarllen y bywgraffiad yma yng Nghymraeg, cysylltwch â ni gan ddefnyddio’r tudalen ‘Cyswllt’.

If you are preparing a biography for an event or profile, please contact us for a tailored version.]

“Ah, music,” he said, wiping his eyes. “A magic far beyond all we do here!”‘ – Albus Dumbledore in ‘Harry Potter and the Philosopher’s Stone’, J.K. Rowling