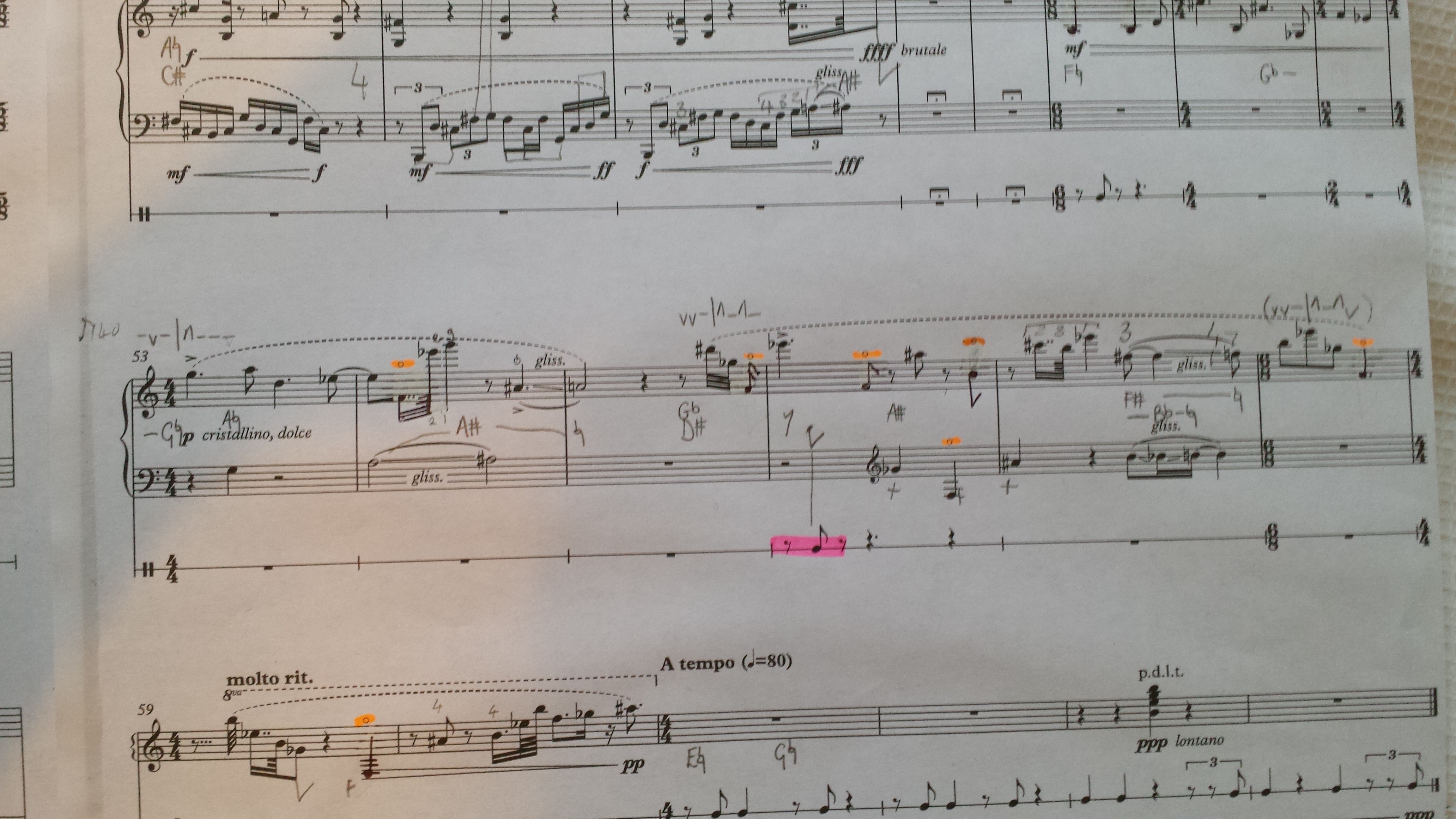 Excitingly, I recently received the final draft of Alex Brusentsev’s (brusenta.com) new piece for solo harp which forms part of his Connect. The. Dots project (http://connectthedots1.wordpress.com/). So what happens next when a performer is first presented with the final draft of a new piece? For the performer this is just the beginning, and for the composer it is by no means the end, but the next stage in the work’s journey as technical and musical elements are explored more fully as part of a whole performance.

When I approach a new piece, especially a contemporary classical one, my first thought is about the layout of the music. This might seem a bit superficial, or something that should be a ‘finishing touch’, but for me, it is important to find a good layout (taking account of any page turns etc.) and to use it from the beginning of the learning process. What you see when you look at the music and how this relates to what you are physically playing is an integral part of getting familiar with a new work. If you’ve ever felt the shocking unfamiliarity of walking into a favourite shop only to discover that the shelves have been entirely rearranged, you’ll get my gist.

Thankfully, hand in hand with the expanding horizons of contemporary classical music, there has been a gradual broadening of our perspective of notational possibilities. We now have the most liberty we have ever had in classical music to present our music in a way that best suits its key attributes, nature and expressive goals. The visual appearance of a score is becoming an increasingly important element of a work’s identity. Alex’s piece is in a landscape format and I have it stuck as three A4 pages on a large bit of black card. This means that wherever I am in the piece, I am seeing it as part of the whole, which is laid out in front of me. Landscape is best here partly because of the long, linear phraseology of the piece, and partly for the practical reason that what with the three staves (two hands and one ‘percussion’), a portrait orientation would incur a lot of page turns.

After establishing a suitable layout, I tend to think generally about the technical and musical challenges presented by the new piece. I’d say there are two main challenges here. Firstly, the phrasing; Alex has used long melodic lines that need maintaining and shaping. The harp is one of the most difficult instruments on which to achieve long legato melodies, largely due to the fact that especially on higher notes the resonance is relatively short. So whereas a violinist can sustain and even grow or diminish through a note, the harpist has to find other ways to maintain the integrity of melodies. The second challenge is the co-ordination of the percussive and tuned playing, with both hands needing to engage in the execution of the percussive effects. There are also other extended playing techniques to be achieved, such as harmonics and playing low in the strings (producing a harsher, more guitar-like sound).

And then comes crunch time, when fingers meet strings (or soundboards!). Here’s a quick breakdown of how I am approaching learning Alex’s piece, all done a page at a time:

2)     Mark the score up as I go along – this is essentially trying to make it as easy as possible for yourself to read the score, giving yourself the best chance of playing the right thing in the right place. I try to eliminate all potential layers of score-to-hand ‘translation’ – half the battle with contemporary scores can be to make them intelligible to the eye

3)     Metronome work – this always starts uncomfortably slowly, in this particular case focusing on a phrase at a time. This kind of work builds and consolidates the actions required whilst continuously raising the tempo. For me, this is the only failsafe way to get properly acquainted with a piece

Bring on the practice, and I hope to see you at the final concert at 1830 on Tuesday 16th September at the Royal Academy of Music!